What You Need to Know About the Fall 2020 Couture Collections

Chanel went punk, Valentino showcased how to do an all-white collection, and Iris Van Herpen surprised no one by being amazing

The presentations for the Fall 2020 Couture all happened remotely. Some brands created artistic videos, others mini documentaries, and there were also the standard look books. Because almost every country in the world went through some kind of lockdown or adopted socially distance measures, the production of fabrics and garments took a hit. Not all brands managed to put a collection, and those that decided to create one reduced the amount of looks (or their size).

The first brand to present their collection was Balmain. To celebrate the 75th birthday of the maison, creative director Olivier Rousteing decided to curate pieces made by him and his predecessors Eric Mortensen, Oscar de la Renta, and founder Pierre Balmain. The presentation was beautiful, and the concept really nice. But the final product was questionable. Most of the pieces were prêt-à-porter and didn’t receive adjustments to be considered couture, and one of the dresses had an unexplained rip.

Chanel downsized the number of looks they usually present, and the end result was actually quite nice. Virginie Viard got inspired by Karl Lagerfeld and his on-and-off muse Princess Diane de Beauvau -Craon, and ended up mixing punk elements with tweed and other classics from the maison.  The only criticism is that it felt too much like Karl, it lacks a distinctive Viard signature.

At Christian Dior the creative director’s signature also seemed to fade a bit. This was one of the best Couture collections designed by Maria Grazia Chiuri in years, there were interesting pieces and, apparently, no problem with their fit. It was inspired by mythology, Théâtre de la Mode, and there were hints of surrealism. Unfortunately, the video presentation featured only white people, and, weirdly, Matteo Garrone, a man, directed it. Maria Grazia is known for creating feminist collections and collaborating with female artists on their presentations. There were garments that referenced feminism, but the presentation was… weird.

Guo Pei’s collection was not weird, but the designs (and casting) were questionable. Called Savannah, the inspiration was the African landscape and animals. You can clearly see how amazing is the craftsmanship of the pieces, and is also really nice that they chose to wear Piñatex, an alternative leather made of pineapple leaves. What is not cool is that there were no black models (and possibly no models born in an African country) in the cast.

A brand that didn’t have diversity problems this season was Schiaparelli. Daniel Roseberry, the brand’s creative director, quarantined in New York and didn’t manage to go back to Paris. So, they ended up not showing any physical garment, only Roseberry’s sketches. Called Collection Imaginaire, it featured many surrealism inspired pieces.

Ralph & Russo also experimented with different ways to showcase their garments. Inspired by travel, art, the natural world and architecture, they produced eight pieces, and developed eight others with the help of AI.

The magnificent Iris Van Herpen present only one piece: a dress called Transmotion. And yes, it is as incredible as all the other collections by Van Herpen.

Fashion Meme Royalty Viktor & Rolf stayed true to their DNA. Composed of three mini wardrobes inspired by different mindsets, the pieces are the perfect level of stay-at-home over the top. The coats are a must to anyone still socially distancing.

Another exquisite collection was the one created by Valentino. Pierpaolo Piccioli decided to create pieces exclusively in white, something very uncommon for him. It was meant to be a rebirth and a response to all the technical problems of socially distant work in an atelier.

Chanel and the Movie Stars 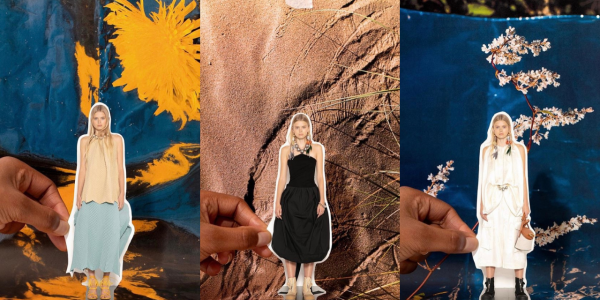 Christopher Kane and his Masterpieces

Burberry Tells a Love Story Between a Mermaid and a Shark